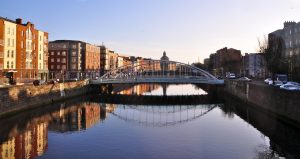 Living in Ireland has a lot going for it, despite the economic problems of the last decade.
The Irish economy is in a strong position in 2020 having recovered impressively from the financial crisis and the subsequent recession.  In early 2012, the unemployment rate was 16% and almost 50,000 Irish people emigrated that year. Now in 2020 the seasonally unemployment rate is down to below 5%.

The Central Statistics Office estimate that 88,600 people of all nationalities moved to Ireland between April 2018 and April 2019.  while the number emigrating was 54,900 . This resulted in net inward migration of 33,700.

Property: Irish house prices dropped by more than 50% from their 2008 peak in 2008 – which was great for anyone looking to buy a house in Ireland. The house prices in most areas have been rising in the past few years but there are still a few bargains to be found.

In Ireland, the personal taxation levels are still amongst the lowest in the OECD. For companies relocating to Ireland – the corporation tax is still one of the lowest in the world at 12.5%. Ireland is the only English-speaking country that operates within the eurozone.

Job vacancies have been increasing since 2015 after several years of slowdown. The construction sector was the main area of slowdown but many major IT-related companies such as Microsoft, Google, Amazon, Twitter, Paypal ,Ebay ,Facebook HP, and Intel have located their European headquarters in Ireland. Skilled IT staff are always required as well as people with language skills.

The pace of life when living in Ireland is very relaxed. Irish people seem to know that life isn’t just about the daily stresses and strains – but more about family, holidays, celebrations and having a laugh with friends.

Maybe your ancestors left Ireland many years ago – and you now want to return to your Irish roots. Maybe you or your parents were born in Ireland and are thinking of going back “home” or even retiring in Ireland. Whatever your reasons – you should find some useful information here to help you if you are moving to Ireland.